Vanessa Kearney and I want to thank those who participated in our Match Play Invitational Tournament this past Saturday at Paradise Valley Golf Course.

We scheduled the event in order to get our team ready for the upcoming North South Shootout which is scheduled for the end of September in Dallas, TX.

Several of our Sistas will attend this event along with other Western States Golf Association (WSGA) teams from the North and South Regions. We played the course using the Team/ Match Play format and gathered after our round to share our learnings. 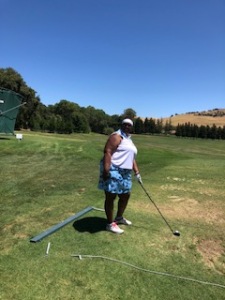 We want to give a big shout out and thanks to Gwen Brown-McKay from Spear Golf Club who drove all the way from Atwater to participate. Gwen plans to travel to Dallas and will certainly be an asset to our North Team

Congratulations to the “skins” winners:

Best wishes to our North Team in Dallas and we look forward to more golfing events in the future.